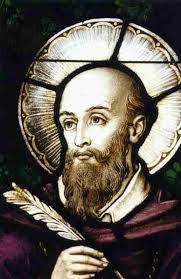 Francis was born at the de Sales castle called Chateau of Thorens in Savoy, France. His wealthy family provided him with an excellent education. He studied at La Roche, Annecy, Clermont College in Paris, and did law at the University of Padua.

By the age of twenty-four, Francis was a Doctor of Law. He returned home, and led a hard-working life as Senate advocate. He was not really interested in important positions or a social life.

In his heart, Francis was listening to a call that kept coming back like an echo. It seemed to be an invitation from the Lord telling him to "Leave all and follow Me." Francis finally tried to explain his struggle to his family.

His father was very disappointed. He wanted Francis to be a great man of the world. But Francis spent lots of time in prayer, finally his gentle ways won over the family and Francis became a priest on December 18, 1593.

In those times Christians were bitterly divided. Father Francis offered to go to a dangerous area of France to win back Catholics who had become Protestants. His father tried to stop him. He said it was bad enough that he had allowed Francis to become a priest; he was not going to let him die as a martyr as well.

But Francis knew that the Lord would protect him. He and his cousin, Father Louis de Sales, began their long walk to the Duchy of Chablais. The two priests soon learned how to live with insults and physical discomforts and their lives were often in danger.

Francis explained the teachings of the Catholic faith in very simple and clear language. And his gentle way with everyone, slowly brought many back to the Roman Catholic Church.

When he was thirty-five years old, Francis became the bishop of Geneva, Switzerland. He travelled and preached throughout the Duchy of Savoy, working with children whenever he could.

He was a good friend of Saint Vincent de Paul. With the help of St. Jane de Chantal, he started a religious order of sisters in 1610. These women are called the order of the Visitation.

Francis wrote wonderful books about the spiritual life and the way to become holy. The books, "Treatise on the Love of God" and "Introduction to the Devout Life", are still available in book stores today. They are considered spiritual "classics."

Bishop de Sales died at Lyons on December 28, 1622, at the age of fifty-six. Because of his good work that brought many people back to God and the Church, he was given the special title "Doctor of the Church." He is also the patron saint of journalists.

We use necessary cookies to make our site work. We'd also like to set optional analytics cookies to help us improve it. We won't set optional cookies unless you enable them. Using this tool will set a cookie on your device to remember your preferences.

Necessary cookies enable core functionality such as security, network management, and accessibility. You may disable these by changing your browser settings, but this may affect how the website functions.